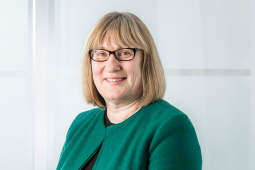 From 2009 -2016 she was the Group Chief Information Officer at Network Rail, leading a large and complex technology and shared services portfolio focused on reducing the cost of running the railway by 25% by 2019.

Over the last 15 years she has held senior executive roles in both IT and business operations within FTSE top 20 companies in the UK, specialising in transformational change.

With Non-Executive Director positions on the Board of Leeds Metropolitan University and Leeds Building Society, Susan is experienced in corporate governance at the highest level.

Her approach in executing new business and technology strategies has led to her being the only European Finalist for a CIO Innovation Leadership Award from the Massachusetts Institute of Technology. In November 2012 Susan was awarded the UKIT Industry Award for CIO of the Year and in July 2014 was listed by Computer Weekly as the 7th most influential woman in UK IT.

In 2013 she launched the Could IT Be You campaign to raise awareness of IT as a career for young women.