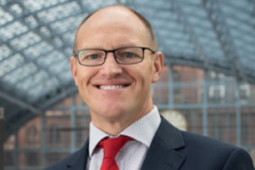 Tim has 25 years’ experience in the rail industry, initially joining British Rail as a Guard at Guildford. Most recently Tim was Managing Director of Stagecoach Rail, with responsibility for Stagecoach Group's rail businesses.

Previously, as MD of South West Trains, he has led the development of both Alliance working with Network Rail and a radical capacity enhancement scheme that will increase peak capacity by 30%.

Tim is also a Fellow and Board member of the Institution of Railway Operators and is passionate about developing people and skills within the industry. He is Chairman of the Railway Benefit Fund charity, which supports current and former employees and their families.

Tim leads the North West & Central (NW&C) region with infrastructure running from London Euston and Marylebone in the south through the Chiltern and West Midlands regions, the North West of England and Cumbria before joining with Scotland at Gretna.

It is home to the West Coast Mainline, the busiest mixed-use railway in Europe, serving London, Birmingham, Manchester, Liverpool, Edinburgh and Glasgow.