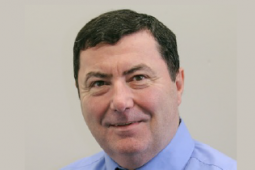 Paul is a Chartered Electrical and Electronic Engineer, with 30 years’ consultancy experience of the management and implementation of new and emerging technology systems in both the government and transport sectors. Paul has led major projects in the UK, Middle East, Europe and Australia. He also has extensive experience of Engineering Safety Management and Railway Safety.

Prior to joining Network Rail, Paul was working as a Principal Engineer with Siemens Mobility developing TMS solutions for the UK ROCs at York, Manchester and Derby, for 2 years. Before this, he spent 20 years with Ricardo Rail (formerly Lloyds Register Rail), where he was a Principal Engineer and Service Stream Leader for CCS systems, working on a variety of UK and International Railway Systems consultancy assignments. He was also responsible for leading major bids.

Paul is a Chartered Engineer and Fellow of the Institute of Engineering and Technology (FIET) and Institute of Railway Signal Engineers (FIRSE). He has BEng (Hons) in Electrical & Electronic Engineering. Paul has previously served as an elected member of the IET Fellowship Policy committee for 4 years and is an IET Fellow Assessor.

Paul is based in Sydney.